My name is Deke Dickerson. I'm a full-time musician, with lots of interests. One of those interests is writing. I write for guitar magazines such as Guitar Player, Fretboard Journal, and Vintage Guitar. I also write music articles, liner notes, and books that accompany box sets.
Once, a long time ago, I thought it was weird to have your own web site. Then, I thought that myspace and Facebook were immature (turns out I was right about that one, but I'm on them anyway). When I heard the word "blog," I decried I would never have one. And yet, here I am. Enjoy... 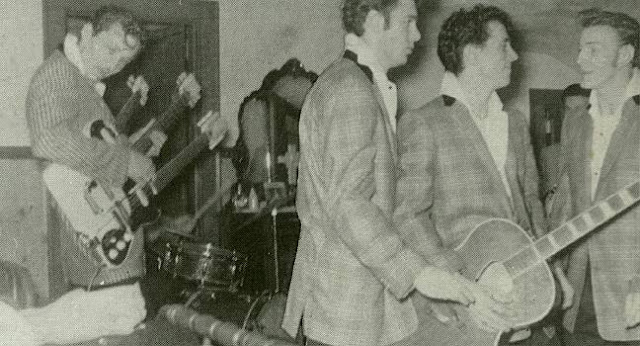 “Why, you’re the first to ever ask me about that damn triple-neck guitar,” said the gentle South Carolina accent on the other end of the phone.
The voice belonged to Johnny Meeks, a guitar player whose name is instantly recognizable to fans of legendary rockabilly star Gene Vincent.  Johnny Meeks was Vincent’s second guitar player--brought to the Blue Caps band in 1957 after their first guitarist, the also-legendary Cliff Gallup, quit due to the rigors of touring.
Cliff Gallup brought a country-jazz sensibility to Vincent’s music, but Johnny Meeks brought a tough rock and roll twang that gave life to such classics as “Lotta Lovin’,” “Dance To The Bop,” “Baby Blue,” and many more.  Despite the fact that Johnny Meeks’ tenure with Gene Vincent’s band lasted less than two years, his guitar approach gave Gene Vincent a solid second half of his original career, and Meeks’ trebly tone set the stage for instrumental and surf music that came in the following years. 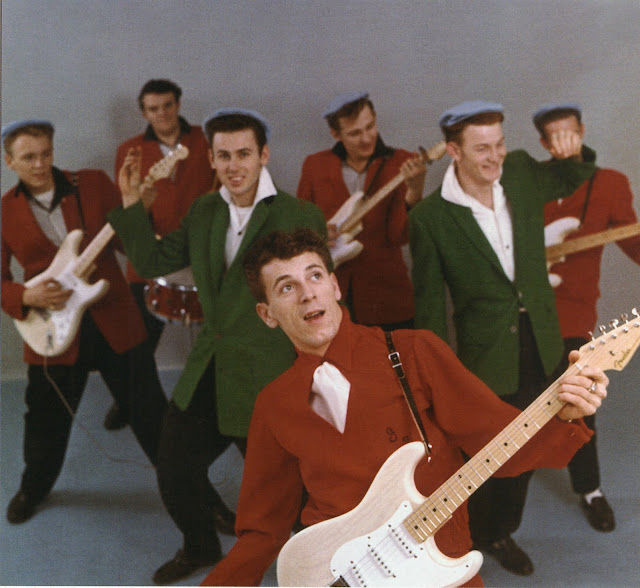 Those who enjoy the science of “Guitar Geekery” know that Johnny was most famous for playing a blonde 1957 Fender Stratocaster (dubbed the “Mary Kaye Strat” by collectors from a publicity picture showing the famous female jazz player holding a similarly appointed Stratocaster).  The truth was that Mary Kaye held the guitar in the promotional photograph for five minutes and then went back to playing her D’Angelico archtop.
Johnny Meeks, on the other hand, took his blonde Strat on the road, hitting gymnasiums in Milwaukee and clubs in Dallas and wherever else you can think of, shows sandwiched in between trips to the Capitol Tower in Hollywood for recording sessions.  In retrospect, a more accurate name for the blonde Stratocasters made in 1957 and 1958 would be the “Johnny Meeks Strat.” 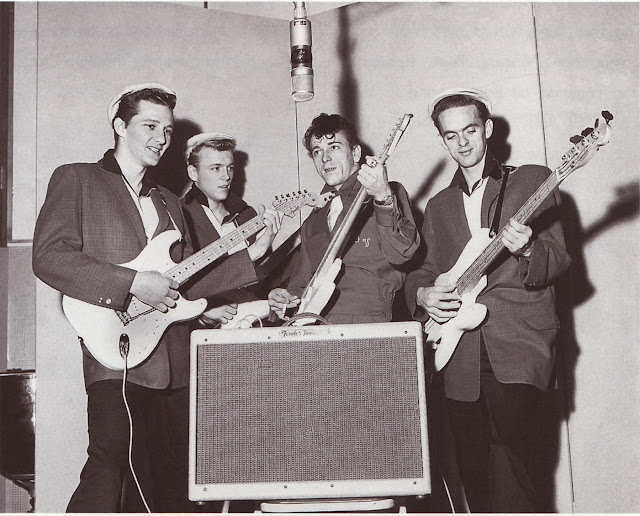 To see these two-dimensional characters come to life, see Johnny Meeks wail on his blonde Strat here, from the 1957 movie "Hot Rod Gang."
True scholars of Johnny Meeks’ tenure with Gene Vincent also know that he briefly played a Gretsch 6120 before getting the Strat.  This Gretsch can be seen on Gene’s Ed Sullivan Show appearance here.  It’s interesting to note that Johnny played on the treble pickup on the Gretsch and got some pretty impressive Fender-like tones out of the 6120.  It is fair to say a great deal of the magic came from the man’s hands.
Below, a picture of Gene Vincent and the Blue Caps recording at the Capitol Tower, Hollywood, California.  Johnny Meeks is seen on the right playing a Gretsch 6120. 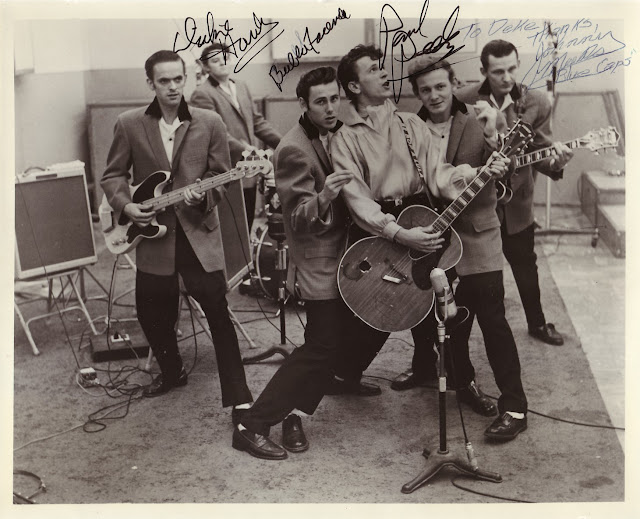 What piqued this Guitar Geek’s interest, however, were two photos circulating on the Internet showing Johnny Meeks holding a black and white triple-necked electric guitar.  No one seemed to know exactly what it was.  Some ventured a guess that it was made by Doc Kauffmann, the California-via-Kansas inventor responsible for the Kauffmann hand vibrato, and the first mass-produced guitars that Leo Fender had a hand in (1940’s “Vibro” and “K&F” guitars were Doc and Leo-produced instruments).  Doc Kauffmann also made a series of “Kremo-Kustom” guitars, which looked quite similar to the Johnny Meeks triple-neck guitar.  Doc made Kremo-Kustom double-necks and triple-necks, and used a black and white color scheme.  My first thought was that Meeks' triple-neck almost certainly had to be a Doc Kauffmann Kremo-Kustom instrument.
Below: A Doc Kauffmann Kremo-Kustom triple-neck guitar. 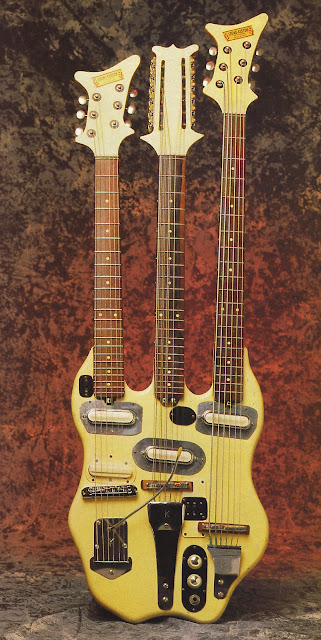 Johnny Meeks is still with us.  He is not an easy guy to find, but not because of stardom or any ill will towards his fans.  The truth is that he lives in a small town in South Carolina, doesn’t have a computer, doesn’t have a cell phone, and he likes it that way.  Meeks spent years in Los Angeles hammering away at the clubs, doing stints in various touring bands (Meeks played with The Champs of “Tequila” fame, played in the house band at the Palomino Club, and toured for a while with Merle Haggard).  These days he’s back in South Carolina, semi-retired, and doing little gigs here and there to stay busy.
Hear Johnny’s cool instrumental “Red Eye” by The Champs here).
Below: a photo of Johnny Meeks, right, with The Champs.

After getting his phone number from Blue Caps drummer Dickie Harrell, I gave Meeks a call and found him getting ready to go to a show at the local swap meet.  I told him how we’d played together a few times nearly twenty years previous, but he had no memory of the shows.
Below: A photo of Johnny Meeks, center, on stage with the Dave & Deke Combo at the Palomino Club, circa 1991-1992. The author is at left. 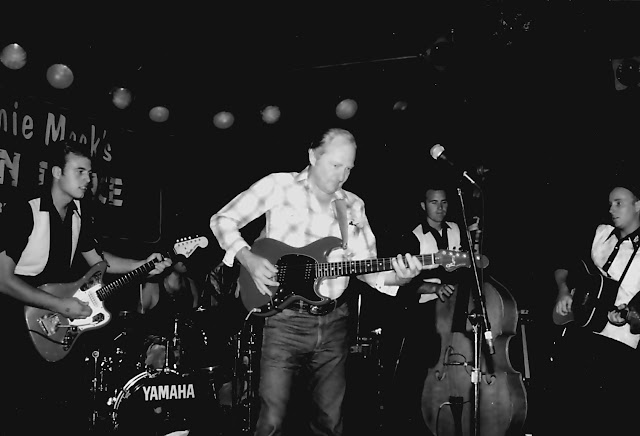 When the small talk subsided, I asked him about the triple-neck guitar.
“A boy in Greenville, South Carolina made that guitar.  His name was ‘Pee Wee’ Melton, and he could pick, boy he could pick.  He made that guitar for himself, and I asked him if he would sell it to me, and he did.
“It was right after that I got hired by Gene (Vincent).  A lot of people joked that Gene wanted the guitar, not me!  That might have been the case, I don’t know, but it was an attention-getting guitar, for sure.
“I used the guitar when I first went on the road with Gene.  Not long after that, Gene bought the guitar from me, and started using it himself.  Not to play, ‘cause Gene couldn’t really play, but he used it as a stage prop, and it got lots of attention.
“I had two stints with Gene, with about a month or two in between after I left the first time.  When I came back to play with him again, the guitar was gone.  I never did find out from Gene what happened to it.  It’s got to be out there somewhere, right?  I mean, you don’t just lose a triple-neck guitar!” 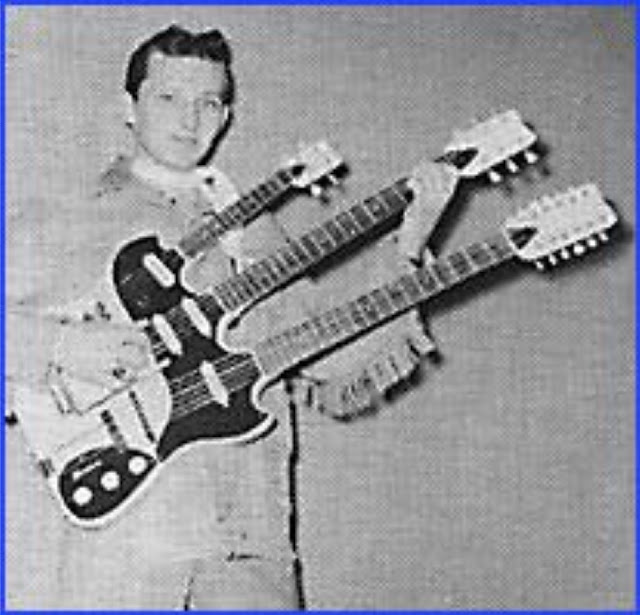 Meeks recalls that the three necks included a standard 6-string guitar, a 4-string mandolin, and a 12-string that he tuned both to standard 12-string tuning and the “Stratosphere” tuning, where the paired strings were tuned in minor and major thirds, allowing for a “twin guitar” effect.
Not much is known about the maker, ‘Pee Wee’ Melton, but there is a brief bio on the ‘Find-A-Grave’ website.  Apparently Melton had a stint in Nashville as a session guitarist, and wrote such songs as “High Tech Redneck.”  See Pee Wee’s memorial page here.
Gene Vincent kept touring, kept playing, and kept making records, until he died of a bleeding ulcer in 1971 at the age of 36.  After Johnny Meeks left his band, he never regained the momentum his career had with “Be-Bop-A-Lula” and “Lotta Lovin’.”
Johnny Meeks, one of the last men standing from the wild days of the 1950’s, jokes about his 57 years of playing experience: “Around here, they say well, you played with Gene Vincent, you played with the Champs, you played with Merle Haggard…how come you can’t keep a job?” 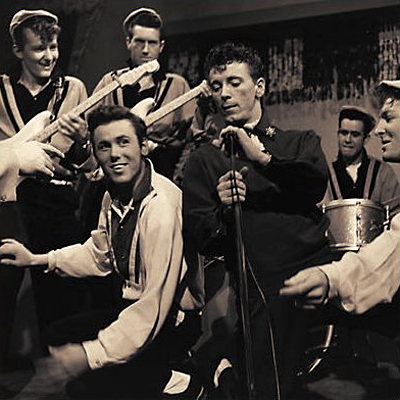 Two faded snapshots, one man’s memory, and a forgotten guitar—these are all that remain of ‘Pee Wee’ Melton’s triple-neck instrument.  The mystery may be solved for the time being, but the guitar is still out there somewhere.  Only if the winding rivers known as Fate and Lady Luck intertwine will we ever know more.
Written by Deke Dickerson
Posted by Deke Dickerson at 9:47 PM

I like the future, the way it used to be.